There are a seemingly infinite number of ways to flatten a list of lists in base Python. By flattening, I mean reducing the dimension of a list of lists. In numpy it would be something like:

But what is the fastest and cleanest way in base Python? If you’ve ever Googled this topic, you’ve likely come across this StackOverflow post that was asked 10 years ago but has answers as new as last year (2018).

So let’s start by creating a small list of lists.

Now, the novice way of doing this would be to instantiate a new empty list, then use a nested for loop to iterate through the list of lists and append each string/character to the empty list.

Pretty from a readability standpoint but inefficient and pretty slow at 2.61 microseconds per loop.

Now we could do the same thing with a comprehension. A bit less readable but still requires no imports and is a bit faster at 1.22 microseconds per loop.

For those of you who’ve been using Python for some time, may remember in Python2, reduce was a built in function. You could do things like sum the digits from 1 - 9 by doing: reduce(lambda x, y: x + y, range(10)). This was moved to the functools library in PEP-3100 because “a loop is more readable most of the times”. While I agree in most cases, I believe flattening a list of lists is one of the exceptions.

That’s it. All we’re doing is using add in place of our own anonymous function (e.g. lambda x, y: x + y) and reducing our list of lists by adding together each of the elements to flatten it. Almost twice as fast as doing this via a list comprehension and very readable.

Another way is by using the iconcat operator and an empty list. iconcat is functionally equivalent to doing thing += other_thing but does so ‘in place’.

Slightly faster (at least at this scale of list size).

One last way is to use chain from itertools and unpack the list as arguments to chain. Like much of itertools, this returns a generator so we must cast as a list if we want a list returned.

For even more detail including how these solutions scale as the size of the list of list gets bigger, go back to that StackOverflow post and check out Nico Schlömer’s answer (it isn’t the selected answer). He even provides this pretty time complexity graph: 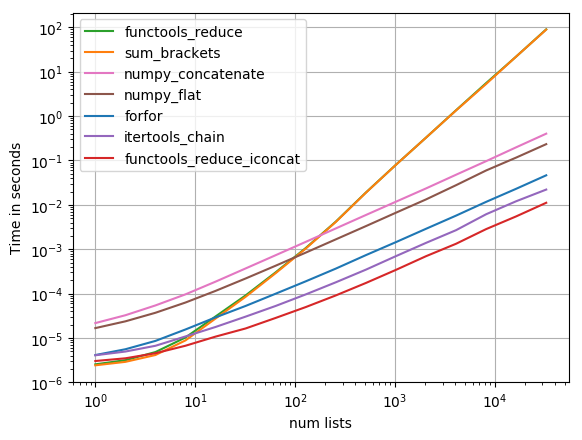